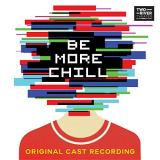 RED BANK, N.J. — Teenage angst: the grief that just keeps on giving, to popular culture, at least. The woes of the misfit and the wallflower, the snooty brutishness of the jocks and the mean girls have been a bottomless well of material for television, movies and books for decades, and the well shows no signs of running dry.

Finding novelty in such a well-worn genre becomes the challenge. “Be More Chill,” an energetic if still familiar-feeling new musical based on the young-adult novel by Ned Vizzini, updates the classic nerd-who-yearns-for-popularity story by adding a sci-fi twist. Jeremy (Will Connolly), the skinny geek protagonist, becomes transformed into the cynosure of his high school’s popular crowd when his persona is tweaked, or upgraded, as one of the songs announces, after he ingests a mysterious Japanese pill.

The show, making its premiere at the Two River Theater here, features music and lyrics by Joe Iconis, who supplied songs for the second season of NBC’s “Smash,” and a book by Joe Tracz. It introduces Jeremy in a song announcing his mild ambitions: “I don’t want to be a hero/ Just wanna stay in the line/ I’ll never be a Rob De Niro/ For me, Joe Pesci is fine.” But his desire to shine is supercharged by a wicked crush on a perky girl named Christine (Stephanie Hsu); so desperate is he for her attention that he finds the courage to sign up for the school play — ever the mark of a loser in most high schools. (Although, thanks to “Glee,” this has begun to feel so 20th century.)

“Gay!” exults his nemesis, a nasty fireplug of a kid named Rich (Gerard Canonico). Perhaps because the musical features a cast of just 10, however, the supposedly “gay” school play troupe is instantly invaded by most of the cool kids, a development that goes unexplained. (Maybe they’re all “Glee” fans?) Anyway, when harassing Jeremy in the bathroom one day, Rich reveals that he was once a “loser just like you,” until he swallowed a gray pill from Japan that includes a “quantum computer,” which implanted itself in his brain and proceeded to direct his every move. What depressed terminal nerd could resist?

And so, after acquiring a magic pellet from a pusher who, amusingly, covers his tracks by working at a Payless shoe store, Jeremy downs his pill — which must be consumed with Mountain Dew — and acquires his very own Squip, or Super Quantum Unit Intel Processor. Portrayed by Eric William Morris as the commanding-voiced epitome of chillness, the Squip begins directing Jeremy’s every action, making like a cyberstylist to give his wardrobe a makeover, and making Jeremy’s former best and only friend, Michael, invisible so that Jeremy won’t be tempted to slide back into his pathetic, constant video-game-playing ways.

As those who watched the second season of “Smash” may recall (all 26 of you), Mr. Iconis composes music in the vein of post-“Rent” pop-rock. The songs for “Be More Chill” lean toward hyper up-tempo numbers, with singsong choruses (and the occasional random singing of “na-na-na”). The more idiosyncratic songs are the fresher ones: Christine’s paean to the joys of play rehearsals, or a funny number sung by Michael (an endearing George Salazar), who locks himself in the bathroom after sneaking into a cool-kid party, and laments the loss of his best friend.

There’s also a charming 21st-century update of “The Telephone Hour,” from “Bye Bye Birdie,” called “Rich Set a Fire (The Smartphone Hour),” although it is nowhere near as infectious as the original.

Mr. Tracz’s book is along the same lines: predictable in its contours, occasionally quirky in its details. And despite performances that are bright and Red Bull-energetic, the characters tend to be well-worn types newly decked out in high tops and H & M gear. There’s the stud-jock, Jake (Jake Boyd), who somewhat implausibly proves a rival for Christine’s affections, and the bitchy popular girls, the queen bee Brooke (Lauren Marcus) and her sidekick, Chloe (Katlyn Carlson), who sets her sights on the newly cool Jeremy.

Mr. Connolly’s Jeremy doesn’t exactly transform before our eyes from neurotic milquetoast to gleaming king of the cafeteria. But he’s a genial performer with a singing voice that has a tang of Billie Joe Armstrong about it. When, inevitably, Jeremy begins having second thoughts about being controlled by the Squip and abandoning his best friend, Mr. Connolly proves affecting in his ambivalence.

And Paul Whitty, who plays all the adult roles — the hyper-enthusiastic drama teacher, the pill pusher and Jeremy’s sad-sack dad, who refuses to put on a pair of pants — differentiates each with admirable expertise.

Despite its unusual cybertwist, “Be More Chill,” which is directed at a brisk pace by Stephen Brackett (“Buyer & Cellar”), hews so closely to formulaic stories of adolescent insecurities and the brutal ecology of high school that the quirky bits register as just that, little fillips of novelty adorning a boilerplate tale, like weird squiggles scrawled across a generic plastic binder.

Even the show’s efforts at more zany comedy sometimes have a whiff of the stale about them, as when the drama teacher announces that because the club’s funding has been threatened (didn’t this happen on “Glee”?), its production of “A Midsummer Night’s Dream” will have to be set in a postapocalyptic future.

“Instead of frolicking with fairies,” he sadly intones, “there will be fleeing. From zombies.” At which point I expected one of the cool kids to roll his or her eyes and snark: “Zombies? They’re, like, so over.”
Last Update:February, 11th 2018