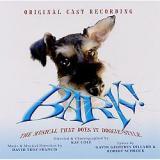 Michael Laun – director, Jacob Montoya – responsible for the choreography. Sacramento Theater hosted play in LA before the time when, in the wave of its success, a second production in Chicago was opened.

Very positive actors, interesting and minimalistic display of being a one of the dog breed – only a few fur items like kneepads, leashes and funny nuances like the collarbones. All of them depict some breed, from a very tough guy like bulldog, to completely gentle creature such as a pink poodle. Each tells own story. Someone’s story is very compassionate and someone’s is so funny that you think that you’ll burst now from laughter.

Production did not come to Broadway because it was not originally conceived as a purely theatrical show. Rather, it is fun and unusual fundraising programme that sprinkles with its naturalness, the complete absence of pathos, which is often inherent to many theatric snobs that do infinitely boring performances for themselves and for others like them. Here, the opposite is true – you will not get bored even for a minute and will not have to keep in mind the tedious half tones of play of classic actors who are endlessly confusing and too dramatized. There are only 6 characters and each of them is in one way or another is charming dog that you immediately imbued with sympathy to. Because, unlike those pesky humans, dogs do not know how to pretend, they are sincere in everything – joy, anger, and even when obnoxious. We love them so much more than surrounding us human biomass that ugly captivated the entire planet.

Adorable characters are not all. Many of the actors have stunning voices, and they make their songs to be highlights of the program as they sing as if want to fill with the voice all available space. 23 songs in total were written by M. Winkler, J. Heath, G. G. Dillard, D. Lukic & R. Schrock. Gavin Geoffrey Dillard – the composer who wrote the music, and in addition, worked on the lyrics.

What is this musical tries to depict? The most important thing – that dog’s needs are very small, and the return of their emotions will be enormous if you will just love them. Even if they pee on the carpet – it is not out of malice, but because they may not know yet that there is a special tray for this. Take a dog from a shelter – pay with your warmth and kindness to those who are not so fortunate as you. To those who do not have a home, and who freezes to the cold outdoors to the bones, nibbling food frosted in the pavement. That's the depiction of this musical.
Last Update:April, 06th 2016