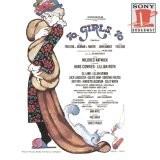 The musical is based on a play of 1958 ‘Breath of Spring’, written by Peter Coke, as well as on British film ‘Make Mine Mink’, which was filmed in 1960. Writers slightly changed the plot of future production – instead of funding an orphanage, mature robbers have started to equip a hotel for the elderly people. Also Norman L. Martin and Fred Ebb changed the ending of the show – it was no longer ending happily. Due to the presence in the product of the elderly characters, in the play were involved the same mature actors. The histrionics’ name indicates the average age of all the participants of the performance. The show was a fast-leaver off the Broadway. Despite the fact that its authors were John Kander and Fred Ebb – on account of whom there are creations as ‘Cabaret’, ‘Chicago’ and others – this production has not made much of an impression on the audience. Perhaps this attitude has arisen due to the appearance of more successful show with similar theme – show ‘Follies’ began 11 days before the premiere of this piece about elderly criminals. The failure on Broadway and negative critical reviews did not allow to receive this musical further life on the American scenes.

The appearance of the show after 20 years on the West End’s stage made a much better impression on the audience. Focusing on a well-known star, involved in the title role, the organizers have done better than their Broadway’s colleagues did. Despite the advanced age – Dora Bryan at the time of premiere was 68 years old – the actress was in very good shape. She demonstrated on the stage not only a great possession with voice, but sat down on the twine, perfectly splitting the legs. Later critics recalled the British production with great warmth, appreciating humor and acting superiority of performers. In the USA, the show took place only within the framework of closed programs that represented forgotten musicals to the public. The audience was able to see the acting of such a legendary artist like George S. Irving again and other veterans of the Broadway stage. Music compositions are different with witty lyrics and unusual melodies. The final song was included in the repertoire of the actress Liza Minnelli. It also became the most famous production’s hit. This rare performance allows beholders to see their old idols again on the stage and enjoy their superb craftsmanship.
Last Update:August, 19th 2016