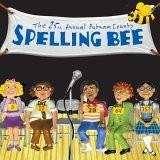 School gymnasium was prepared for the finals of the regional competition for the best spelling and pronunciation. Young participants have started to be registered by the former winner of the world championship Miss Rona Lisa Peretti. Olive had problems with the payment of the participation fee, but the girl was met well when she said that her father would bring the required amount by the end of the contest. Soon Douglas Panch announced participants spelling rules that they must follow. 10-year-old Logainne Schwarzandsrubeniere started the competition first. Girl has successfully coped with the task, and then the organizers called Leaf Coneybear. Struck not only himself but also his family, the boy successfully wrote the word without knowing its meaning. Olive was forced to abort assignment to protect the empty chair prepared for her father. Chip Tolentino was thinking of other things like pretty girls, and therefore could not write a word correctly. Following an internal impulse, Leaf has successfully completed a new assignment, not knowing again what it was. William Barffe had a special technique because of the disease – the boy wrote with his foot.

During the break, Chip was instructed to sell food – this was his punishment for the knockout. Starting a quarrel with William, he began to throw peanuts at him. Olive stood up for the boy, who had a severe allergy on peanuts. Embarrassed Barffe began to feel sympathy to her. After the start of the second round, participants continued competition. They went through a few levels without loss, but in the end, Leaf left their ranks. The finalists were four contenders for the title. A representative of Catholic school Marcy could not stand the stress and went off the distance. Logainne Schwarzandsrubeniere had a hysterics, and one of her parents rushed to the scene to calm their daughter. Under cover of this, man tried to hurt William Barffe and his wonderful foot. Rona Lisa Peretti received a message from Olive's father – he was delayed at work, so the question of the contribution would be decided later. Girl with difficulty kept the focus, learning the news. Suddenly William’s foot stuck to the floor. Fighting for participation in the contest, the boy realized that he could write with hand. Logainne dropped out of the competition, being too wise performing a simple task.

Only two members left at the end – Olive and William Barffe, who were nip and tuck. The girl and the boy began to experience a lot of sympathy to each other. For William, it was a new thing – he stopped to think about himself and his disease. Despite the good attitude to the opponent, the children realized that only one participant could win. The main prize went to Barffe – excited boy got $200. Despite the loss, Olive was happy for William, which significantly reduced the level of his concern due to her failure. Suddenly Douglas Panch announced – for the second place, it was decided to hand over the prize money too. It was enough for Olive to make a deferred payment for her participation in the competition. The girl had no idea that the man decided to help her and provided the required amount from his own purse. Actions of a colleague praised Rona Lisa Peretti, which pleased Panch very much.
Last Update:August, 17th 2016