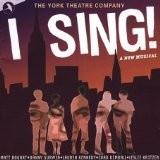 I Sing - York Theatre Concert Cast.
A new score for off-Broadway and regional theatre! The recording features a cast of the brightest young stars of Broadway: Matt Bogart, Danny Gurwin, Lauren Kennedy, Chad Kimball and Leslie Kritzer.
I Sing! is a musical conceived by Eli Bolin, Sam Forman and Benjamin Salka. The show was first produced in America in 1999 by Vertigo Productions
in the Shanley Pavilion at the Northwestern University in Illinois. It received its first UK premiere at the Union Theatre, London in November, 2006.
The show is about Nicky, Charlie, Pepper, Heidi and Alan, five post-grads who are living in Manhattan. Everything is sung, just like in Les Miserables. There is no spoken dialogue.
Release date: 2002
Last Update:March, 28th 2016