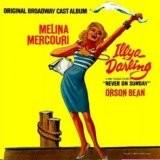 The first performance of the musical took place in 1967 on the Broadway. The plot of the show is based on the Greek movie, which experienced wide popularity among the audience at that time. The movie was called "Never On Sunday", and it made M. Mercouri, who played the main female role, popular. She has acted a leading role in the musical too. The scriptwriter and the producer of the movie was G. Dassin. Dassin has also played the female role in Broadway show.

But here, the coincidence of the musical and the movie doesn't come to an end. For the production of the musical, the same costumier (T. V. Aldredge) and the same composer (M. Hadjidakis, who wrote several songs for the musical and received an Oscar for the best song for the movie) were invited. The musical has a rather difficult history. It was planned to make small performances in the country, but they didn't make success.

The show was also exposed to the censorship influence. The committee recognized this musical as inadmissible for the audience less than 16 years old and demanded to cut some scenes out of it, including a scene on the motor ship, a conversation scene in a bed and a scene in the shower. Therefore, the version, which has been put on the Broadway, is considered the first and official version of the musical. After a premiere, the popularity of the main actress has increased. The admirers sent her lots of love letters. Because of its wide popularity, the show was performed on Broadway through the whole year. The musical was nominated for six Tonies, but didn’t win any. After a series of displays on Broadway, the musical has gone on tour with C. Chariss.
Release date: 1967
Last Update:March, 28th 2016