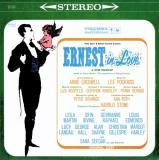 This musical was based on the television play in 1957, and its Broadway premiere was in 1960 in the Gramercy Arts Theatre. One season it ran in other cities as off-Broadway show. Generally, this work fell into the stream of 59 – 60 years, when there were many reviews on Broadway, including the processing of very old works, for example, of 1894’s The Fantasticks. This musical is also a reworking of old material, from 1895, by Oscar Wilde.

It was directed by Harold Stone, and Frank Derbas was responsible for the choreography. Despite its small quantity of 103 performances, the critics loved it because it was a modification of the classical plot. Actors in it were: S. Seegar, A. Shayne, L. Edmonds, C. Gillespie, J. Irving, G. Hall, L. Martin, L. Landau & G. Raphael. After completion of the Broadway, a musical during the 1960s was a frequent guest in amateur performances. Columbia Records was an issuing company of record on cassettes, and music on the disc came out in 2003, 43 years after its start on Broadway.

The musical also traveled to Japan, where he has been redesigned for the mentality and was released in two acts in 2005. In 2010, it was resumed as an off-Broadway show in the theater named Irish Repertory.
Release date: 1960
Last Update:February, 24th 2016