Take Me Along synopsis 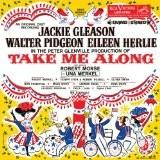 Take Me Along synopsis

Take Me Along Synopsis - Broadway musical

In Centerville occurred a big event – the owner of the newspaper Nat Miller won for the residents of a town a new fire truck! During the celebration and rejoicing, people praised the publisher, calling him a great man. Denying these words man was convinced in his greatness even by his wife Essie and sister Lily. Despite attempts to stop the praise, Nat was very happy to hear such opinions about him. At this time, his 17-year-old son Richard had a big trouble. Father Muriel overheard the romantic verses that a boy read to his girlfriend and found them too erotic. Angered man drove a young man out of the house, saying that he would withdraw advertising from the newspaper of Nat, for which he regularly paid a lot of money.

Local drinkers discovered that their old pal Sid Davis returned from Waterbury. While men meet a friend, Essie tried to tell Lily, how to lure her brother into the trap of marriage and to change his behavior and opinion about this issue. But the young woman doubted that she could affect Sid. Arriving at the home of her sister and husband, Davis did not have time to tell Lily some gentle words, as an angry Mr. Macomber came to Nat Miller. When he demanded to punish Richard, the father did not believe in the guilt of his son. During the quarrel, Nat kicked Macomber out of his house, calling him an elderly man, who already has forgotten what the feeling of love is. After quietness occupied the house, Sid Davis suggested Lily Miller to marry him. Hearing it, finally, from a sober person, the woman agreed, but placed a condition – he must always abstain from alcohol, even at a picnic devoted to 4th of July.

Soon the whole town began to celebrate the holiday. Only Richard was depressed – he received a letter from Muriel, in which the girl broke up their relationship. Young man decided to go for a swim in the evening with his friend. During lunch, it turned out that Nat and Sid heavily drunk at a party. Frustrated Lily realized – her fiancé had not changed a bit. Sid went upstairs to sleep off. Seeing this scene, Richard was convinced – true love does not exist. Soon, the young man went to prostitutes. After drinking, he decided not to deal with fallen women, after all. Once he had a nightmare, he went home, where alarmed relatives were waiting for him. Sober Sid tried to say sorry to Lily, promising to tell his nephew how to deal with drinking.

Richard soon learned that Muriel was still in love with him – that letter she wrote to her father's demand. Faced with the girl secretly on the beach, a young man convinced that her feelings were still strong. The young man realized – now he was able to withstand any separation with his beloved. At the insistence of parents, Richard soon went to university for 4 long years. Sid Davis realized that he was not worthy of Lily. The woman gave him a chance to change himself, but the man had to return to his old job in Waterbury. Sid decided to take this opportunity and gathered his belongings. Before leaving, he saw Lily – woman prepared her luggage to go together with him. Leaving a festive city, the couple felt a premonition of imminent happiness.
Last Update:July, 18th 2016