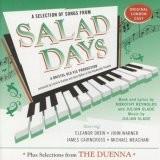 Unusual musical was created in 9 years after the end of World War II. The optimism of that time, and the coronation of Elizabeth II left their mark on the atmosphere of the piece. Uncontrollable youth and catchy music, presented in the histrionics, gave the musical a very long life in the UK. Julian Slade and Dorothy Reynolds invented this show to close the summer season of Bristol Old Vic's Resident Company in just three weeks. Despite the great success with the local audience, the creators did not even think about promoting of musical on West End’s stages.

A simple story, wit, excellent lyrics and very catchy melodies attracted the attention of the London’s businessmen. The production with the same cast moved to the British capital. The grand success of production has been a pleasant surprise for the musical’s creators. The audience immediately appreciated light and fun performance. Vaudeville Theatre has been visited by Elizabeth II, the Queen Mother and Princess Margaret. The staging was liked by the representatives of the ruling monarchy. Later Princess Margaret even bought this musical’s notes.

During the year, the play recouped the production costs and began to bring real profits. This histrionics became the first British performance, which could divert attention of the audience from the American shows, transferred to the West End. Moving the production overseas in Canada was successful – local audiences also appreciated the work. But due to the strike of newspapers’ workers, the New York’s off-Broadway premiere was unnoticed. The musical has not received any reviews from critics and was removed from the display when funds of producers ended.

Due to the unusual story, the play was very memorable to the audience. The idea that it was possible to dance continuously, was liked by many people. Despite the apparent frivolity, musical raised quite serious problems. The fight of youth for the right to organize their own future independently, attempts of authorities to take under control citizens in all spheres of life – even in fun, the desire to overcome the inertia and higher social class’ snobbery – these all were perfectly disguised with original tunes and great performance of dances.

The modern versions of this musical aren’t so relevant, but the rejuvenating stream of youth and joy still delights audiences and critics. Particular attention of the audience attracted new production of 2009. Reviewers noted that the director B. Bankes-Jones was able to transfer into our time carefree atmosphere of the original production. Melodious songs liked the majority of the audience. Staging resumed during the Christmas for two seasons. The beauty and originality of the musical remain to this day demanded by the public, despite the fact that since the creation of this play, it has been more than 60 years.
Last Update:July, 13th 2016