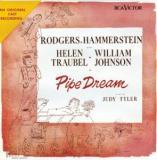 The young biologist named Doc spent much time in the laboratory by testing samples of marine fauna. The young man gladly talked about his work with his friend Hazel. Soon his other friends came to Doc. One of them brought a homeless girl. She cut her hand on the glass, which she broke to get donuts. Not being a doctor, biologist still handed a first aid. The owner of the Bear Flag Café learned about the new girl who appeared in the city. Fauna invited a homeless girl Suzy to work in her establishment and saved her with that. Police officer came to expel a girl outside the city, but after learning about her employment, left a girl alone.

Local homeless people were concerned about their fate. Shed, where they spent the nights, changed the owner, but the Mexican Joe has never visited them. Shortly after the residents understood that buying the store, the man didn’t know that the barn was also included in the deal. Using the ignorance of Mexican, homeless people decided to arrange their own destiny. They came up with a way out of this situation – falsified money lottery would be held, the winner of which would be biologist Doc. Becoming the owner of the barn, the young man never would expel homeless people out of there. With the money obtained through the sale of tickets, it was decided to buy new equipment for his laboratory. Distribution of the lottery began through the store of unsuspecting Mexican.

Suzy and Doc had an attraction to each other. She tried to convince the man to ask a girl out on a date – the hostess had to take her from the Bear Flag Café, where private night party would be held soon. Doc agreed to treat Suzy like a lady. Young man and a girl met for dinner. Then they decided to spend their night on a remote beach. Suzy returned from a biologist and had a talk with his friend who explained that Doc would not continue their acquaintance, as he needed a wife, not a passion. During the lottery in a house of tramps has been decided to make a costumed party. Suzy was going to ask a biologist through the song there – if he wants to marry her? After Doc was announced as the lottery winner, hearing the song of Suzy, biologist was embarrassed. Both he and a girl soon left the party, which soon turned into a brawl.

Suzy got a new job in the production of burgers and settled in an abandoned boiler room. Soon the girl was wooed by Mexican Joe, but she turned him down. After learning about the opponent, Doc eventually asked Suzy to marry him. But this proposal was not accepted too. His friend found out that she would not agree to marry a biologist, but would not leave him in the misfortune. He helped to a friend by breaking his hand in a sleep. Suzy immediately began to care for injured Doc. The young man told her about his feelings, and now he was not rejected. Soon the guests came to biologist. They brought equipment for laboratory, bought at the money from the lottery. Friends ordered through the catalog a huge telescope, confusing it with a microscope, which Doc actually needed.
Last Update:July, 06th 2016