On Your Feet! review 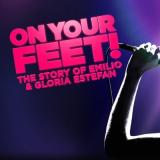 On Your Feet! review

On Your Feet! Review - Broadway musical

The recipe may be familiar, but the flavor is fresh in “On Your Feet!,” the half-formulaic, half-original and undeniably crowd-pleasing musical about the lives of Emilio and Gloria Estefan that opened on Thursday at the Marquis Theater.

To cite the most unusual element: Many a musical could be described as a car crash, but I can’t think of any in which such a calamity figures as a dramatic turning point. Still, it’s no spoiler to say that the show includes the accident that threatened Ms. Estefan’s life and might have ended her career. Fans of hers will recall that 1990 incident, which darkens the second act and brings some gravity to this mostly flashy, salsa-splashed show.

The musical, which stars a vibrant Ana Villafañe as Ms. Estefan and a commanding Josh Segarra as her husband and musical collaborator, neatly showcases the boppy dance-floor hits and swoony ballads that made Ms. Estefan and the band Miami Sound Machine a radio and MTV staple in the 1980s. But with an often mechanical book, moving through its rags-to-riches paces as if to a rigid percussive beat, “On Your Feet!” ultimately falls somewhere in the middle of the hefty pack of jukebox musicals that have plugged in to Broadway’s power strip

Like the Carole King musical, “Beautiful,” albeit with a built-in audience of a different generation, “On Your Feet!” offers a music-business bio-drama laced with hurdles, and a score stuffed with familiar songs, in this case “Conga,” “Rhythm Is Gonna Get You,” “Don’t Wanna Lose You Now” and many others. But it also depicts the struggles of its Cuban-American characters with honesty, if occasional shorthand.

We meet the young Gloria (a terrific Alexandria Suarez) in Miami, where she and her parents moved after the Cuban revolution. Singing improvised compositions and strumming her guitar, she listens to encouraging words recorded on a tape by her father, José (Eliseo Roman), who is away fighting in Vietnam: “You’re a born artist, my angel. And one day you’re going to be a big star!”

Such rote dialogue comes as a jarring surprise, given that the book writer, Alexander Dinelaris, shared an Oscar for the screenplay of “Birdman.” (His less impressive stage credits: the ill-received musical “The Bodyguard” in London and the dreary “Red Dog Howls” at New York Theater Workshop.) Throughout, Mr. Dinelaris’s writing oscillates oddly between showbiz clichés and intimately observed scenes of family life.

Once back from the war, José develops multiple sclerosis, and one of the musical’s most affecting scenes finds Gloria confessing her love for Emilio to her father, who’s unable to speak. As Gloria’s mother, Andrea Burns gives a vivacious, tart performance as a sort of anti-Momma Rose, whose disapproval of Gloria’s ambitions stems partly from envy; her father quashed her chance early in life to become the Spanish voice of Shirley Temple. At the same time, Gloria’s grandmother, or abuela, played with endearing warmth by Alma Cuervo, furtively supports Gloria’s burgeoning career.

Mr. Dinelaris’s book includes welcome kernels of wit, as when Emilio, whose band is established in the Latin market but is fighting for crossover success, tells a promoter how well one of the songs went over in Sweden. “You know how white those people are?” he says. “It was like watching a room full of Q-Tips bouncing all over the place.”

The Marquis will, I suspect, see its share of folks — Q-Tips and others — behaving in like fashion when “On Your Feet!” roars through the up-tempo dance numbers, choreographed with swirling skirts and swiveling hips by Sergio Trujillo. The very air in the room seems to vibrate when the crackerjack band strikes up these brass- and percussion-driven songs.

Then again, the energy sags and the invention flags when the musical reverts to the story of Gloria and Emilio’s path to professional success. “You’re Emilio Estefan. You play music with the Miami Latin Boys,” Gloria’s grandmother helpfully announces when Emilio comes looking for the young woman whose musical talent he has heard about. He invites her to audition informally for his band, and Gloria, naturally, wows them.

The wrinkles on their upward path are ironed out quickly. Gloria’s shyness and awkward dancing melt away in the course of a single number. After the band has begun to climb the charts in Latin markets, a record executive (bordering on Jewish stereotype, as played by Lee Zarrett) dismisses their dreams of recording in English.

“You should look very closely at my face,” a heated Emilio says, “because whether you know it or not … this is what an American looks like.” (This applause-baiting line achieves its aim.) On Emilio and Gloria fight, taking the promotion of their song into their own hands, as their struggles bring them closer together. (The romance is clinched in a single scene.)

Ms. Villafañe sings with a timbre similar to Ms. Estefan’s and gives a feisty and funny performance that blossoms emotionally when Gloria’s accident sidelines her career, and she and Emilio come into conflict over her comeback plans.

Mr. Segarra brings a forceful magnetism and swarthy good looks to his performance, although his scruffy singing voice does no favors for ballads with lyrics like this:

’Cause when I close my eyes
I still can see your smile
It’s bright enough to light my life
Out of my darkest hour.


Although they are sometimes smoothly woven into the plotline, these blandly generic love songs can also be a drag on the production’s energy.

till, there’s no lack of zest in the musical, which has been directed with button-pushing professionalism by Jerry Mitchell. It rarely misses an opportunity to flaunt its allurements, including a lively cadre of dancers and lovely sets by David Rockwell that evoke Miami and the old Havana gracefully.

And, yes, in its desire to please it can be shameless. The conga that concludes the first act features a perky young boy in a skullcap (long story!) brandishing maracas as he sings and dances to the percolating beat, beaming a big smile to the balcony. Resist if you dare. Does “Hamilton” have a cute Jewish boy leading a conga number? I think not.
Last Update:November, 28th 2016