Once On This Island review 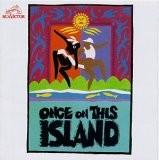 Once On This Island review

Once On This Island Review - Broadway musical

The musical is based on the novel ‘My Love, My Love; or The Peasant Girl’, written by R. Guy in 1985. The author was born on island Trinidad. The action takes place in the Caribbean Sea on the French Antilles. The storyline uses beliefs of local residents – former slaves brought from Africa. Social inequality of people of the island is reflected not only in the form of different well-being, but also in the skin color. As noted by the critics, the life of the main character has a great resemblance to the stories of the Little Mermaid and Juliet. R. Guy, author of the original novel, based own efforts on the works of the great Danish storyteller Andersen.

In the original Broadway production, color of artists matched their characters – black farmers and light brown creoles-aristocrats. In the scenario, it is possible to remove the reference to this distinction that enables the use of a multi-ethnic musical troupe. The main obstacle between a poor girl and a rich young man is their class difference.

Critics pointed out that the creators of the musical could cause in the audience the feeling of being on an exotic island. Costumes of Broadway’s performers differed with bright colors and original styles. Deities of island were portrayed in the form of huge masks worn by actors. In the London version of the musical of 1994, characters were dressed in classic outfits of Creole type. Only deities were presented with unusual costumes. There are also performances, in which the main characters wear uncomplicated, although different in color variety, gowns.

Broadway production of 1990 was nominated with such ones: Drama Desk (1 nomination), Outer Critics Circle (2 nominations), Tony (8 nominations). The musical has received Theatre World Aw. The London production in 1994 was four times nominated for Laurence Olivier and won once in the same category. At 23rd Broadway’s rental week (as of November 1991), the box office for the weekend amounted to 103,746 dollars. The final weekend of the show – in December 1991 – brought the cash in the amount of 140,532 dollars.
Last Update:June, 25th 2016