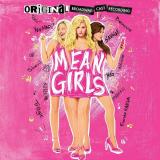 Those high-school girls who laughed themselves silly at Tina Fey’s 2004 movie “Mean Girls” are now old enough to take their own teenaged daughters to this bouncy musical adaptation of that girly movie. The show’s high fun factor comes as no surprise — its undying theme of high-school-as-living-hell lends itself to the gaudy excesses of the Broadway musical form. You can’t have too much pink or too much bitchery in a show about pretty, popular “Apex Predators” (as one of the witty songs would have it) who pounce on their helpless prey and leave their victims traumatized for life.

Director-choreographer Casey Nicholaw (direction = 9/10, choreography = 6/10) gets this material. The stage swirls with non-stop traffic, if not perfectly executed dance movement. And Gregg Barnes’s costumes come in vividly clashing colors. The staging is actually too busy, too colorful, too loud, as if Nicholaw doesn’t want us to notice that not much of interest is happening.

As far as the story is concerned, Fey is faithful to her own original movie scenario about those “mean girls” who rule that low society known as high school and Cady Heron (the likable and watchable Erika Henningsen), a transfer student from Kenya who finds herself in a different kind of jungle.

The show’s title refers to the three alpha girls who dictate the rules of popularity that govern the social rituals at North Shore High School in Chicago. Ashley Park is cute as Gretchen, the insecure one. Kate Rockwell is appealing as Karen, the dumb one. And Taylor Louderman, as Regina George, the bossy leader of the pack, is every inch the “Queen of Beasts.” All three of these young actresses have mastered the looks, the moves, and the attitude that have earned their characters the collective title of “the Plastics.”

Stitched into costumer Barnes’s coordinated outfits of tight tops and teeny skirts, these tyrants are the last word in power fashion. “You can’t wear a tank top two days in a row,” according to Gretchen. “And you can only wear your hair in a ponytail once a week.”

Surprisingly, these little snobs want Cady to join their tribe. And Cady, who is starved for human companionship after a life in the African bush, is happy to play the sacrificial lamb — a misjudgment that launches the plot.

Fey has front-loaded the show with great gags, like the course in “Health and Human Sexuality” being taught by Coach Carr, who informs his class that “this fall we’re gonna be doing the state-required unit on Abstinence. And then in the spring we do Condoms and Nutrition.” Fey even throws in lots of snappy one-liners that actually work, like one student’s fond description of her best friend as “almost too gay to function.”

Nell Benjamin’s lyrics aren’t half as clever as Fey’s off-the-cuff wisecracks, but they get the job done and are quirky enough to make you listen hard for the good stuff, providing enough payoff lyrics to reward your attention. For example, this passage from “Where Do You Belong?,” a song that good guys Janis (the likable Barrett Wilbert Weed) and Damian (the lovable Grey Henson) sing to Cady as they take her on a tour of the cafeteria, looking for the right crowd for her. “Varsity Jocks and JV Jocks / Will throw you in a locker if you say “hello” / The Rich Stoners hate the Gangsta Whites / Though they’re all smokin’ the same oregano.” That smart song takes care of every clique in the whole school, which is pretty good for one number.

Cady’s troubles begin when she forsakes her true friends Janis and Damian for the Plastics, who promise to transform her into a popular girl. Louderman is terrific as the girl you love to hate. “My name is Regina George. / And I am a massive deal. / Fear me. Love me. / Stand and stare at me.” If the music were less monotonous and as witty as the lyrics, we’d probably leave the theater humming lines like those.

Fans of the original movie should be reassured that nothing important has been purged from the story. Cady falls for Regina’s ex-boyfriend, Aaron (a very clean-cut Kyle Selig), which causes her former friend Regina and her brat pack to come after her with claws bared.

Henningsen has the skill (and the voice) to make Cady the good girl she needs to be, and she gives Cady the grace she needs to laugh at herself. In “Stupid with Love,” Cady confesses to one ill-fated brush with love: “He ran from me / Literally ran from me. / And being Kenyan / He ran fast.”

But despite Cady’s fine mind and Henningsen’s quick wit, good girls aren’t half as much fun as bad girls. So, Regina (and Louderman) wins this competition – no matter what the book says.
Last Update:February, 26th 2019