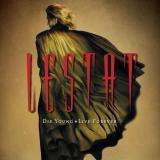 Lestat asked Marius, what is the meaning of vampire life. One of the earliest members of the genus replied that he didn’t know. In these lines lie the two main meanings of musical named Lestat. The first demonstrates that even after obtaining immortality, people often do not find their place in the world and dissolve. The second shows that even a vampire has the right to choose his or her path: one becomes a ruthless machine of death, while others refrain from violence and trying to enter into eternity like an ordinary person. It depends solely on each vampire, particularly, from power of will and the ability to hide the dark side.

During the musical, Lestat was able to experience all the above-mentioned delights of vampire life. Saying in the final “I am the Vampire Lestat, and I will live forever”, he makes it clear that he was able to find the meaning of the further existence. What it is? This is an entirely different question.

It is possible that in this musical, Hugh Panaro had to perform the most difficult role in his artistic career. Lestat is dramatic character, whose identity constantly transforms with the knowledge of vampire nature. In some episodes, he appears as a weak personality, ready to die at this very moment, and in the other – as the absolutely ruthless villain, instilling a sense of fear in the viewer. Actor, without exaggeration, played excellent and very sorry that for his work he wasn’t awarded nor even nominated on any prestigious award.

Music is another strong point of the production. It rarely comes to the fore, but it creates a quality background, harmoniously blends with action. Solo song Lestat In Paris is tremendous! Tenor of actor Hugh Panaro will remain in the memory of the audience. But this musical may have not been made, if Elton John didn’t insist on the creation.

Lestat is unique kind of musical. It must be said that the project is really complex. It raises problems of human relationships and emotions, only reveals them in rather exotic form. Gothic style of narration, beautiful voices & artistic performance, fantastic attires – all of this gives cult status to the play, which we have already felt in the movie.
Last Update:April, 21st 2016