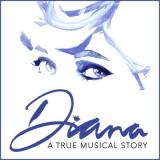 The story of Princess Diana’s life was bound to be turned into a big, boisterous, Broadway-style musical. But who would have guessed that the music would come from David Bryan, a founding member of Bon Jovi?

If a rock star were required, the job of telling this romance-filled, scandal-plagued, tragically abridged tale should probably have gone to Diana’s friend, Elton John. But I would have opted for Adam Guettel, a Broadway composer whose work (“The Light in the Piazza”) gracefully balances pop intensities with operatic lushness, much like Diana herself during her years in the radioactive spotlight.

How much should it matter that “Diana,” the new musical from Joe DiPietro and Bryan (the duo behind the unlikely Tony winner “Memphis”), is no more British than “The Real Housewives of New Jersey”? I have to confess I was thrown by musical numbers that made Diana (Jeanna de Waal) and Prince Charles (Roe Hartrampf) seem as American as Applebee’s — quite a feat considering De Waal was actually raised in England.

Forgive the chain restaurant analogy but the show, which is receiving its world premiere at the La Jolla Playhouse, has a generic quality that for all its efficient smoothness seems culturally misplaced. Although castle gates figure prominently on David Zinn’s set, the hard-charging musical ensemble, which at times seems on the brink of doo-wop, kept transporting me back to “Memphis” and its Broadway rundown of the birth of rock ’n’ roll.

On the bright side, “Diana,” staged by La Jolla Playhouse artistic director Christopher Ashley, has a lively sense of humor about itself. The tone is ironic, the pulse is fast-moving and the tragic ending isn’t milked for tears. The show doesn’t work but that hardly matters these days for a musical that can draw in the tourist masses. (Words spoken after the curtain call by a man seated near me: “I just love the subject matter, the royal family and all that stuff.”)

A figure wearing Diana’s wedding dress appears onstage at the start of the show. And then the actress playing Diana sidles up with a delicious opening line: “You know what I was thinking right here, at this moment? Before I agreed to all ‘this’ — perhaps I should’ve dated him more than 13 times.”

Charles, a “gangly Romeo” noticeably more handsome than the real-life model, has all the emotional delicacy of a Trump scion. He’s the bachelor equivalent of a Trojan horse — a spectacular trophy harboring nasty surprises. The real heavy, however, is Camilla Parker Bowles (Erin Davie), a married woman who has Charles wrapped around her adulterous finger. The two can’t tie the knot because, as Camilla reminds her occasionally obtuse prince, “You were expected to find a proper virgin — and that certainly wasn’t me.”

Diana, a naïve assistant kindergarten teacher who dreams of finding her true love, falls easily into the trap that is laid for her. Becoming a princess is all this English rose has ever wanted. The tabloid press, sensing vulnerability the way a shark scents blood, can’t get enough of her. The nonstop media attention pressures Charles to make a decision: Is Diana just another playboy diversion or will he make her Princess of Wales.

He turns to mother for advice. Queen Elizabeth (played by the formidable Judy Kaye) offers the romantic equivalent of realpolitik in the song “Whatever Love Means Anyway.” In short, “love evolves and bends/And men take other friends.” Charles, ever the dutiful son, takes this to mean he can discreetly have his Diana and his Camilla too.

This recap might put you in mind of “King Charles III,” Mike Bartlett’s self-described “future history play,” but whatever cleverness exists in DiPietro’s book is regularly undermined by splashy musical numbers that seem completely foreign to the story. (The lyrics are credited to both Bryan and DiPietro.) Charles complains to Camilla that Diana has the “musical taste of a teenage girl,” so perhaps her penchant for Dire Straits, Culture Club and Duran Duran has given the creators a license for an all-out 1980s attack. But the score is actually closer to commercial Broadway in the early aughts, an even more dated style to my ear.

While clumsily incorporating too many biographical side notes (including a suicide attempt and eating disorder issues that are touched on with perfunctory haste), the musical tries to draw a relatively complex outline of Diana. Weaned on the romance novels of Barbara Cartland (who makes a couple of zingy appearances, courtesy of Kaye, to set this impressionable lass straight), Diana can’t resist a storybook narrative. She’s innocent to a fault when she first arrives on the royal scene, but nearly everyone at court underestimates her.

Forced to get Machiavellian quickly, she wields the media spotlight to her own advantage after discovering the truth of Charles and Camilla’s relationship. (The vulturous British press is summarized in the show by a group of pervy-looking men in raincoats.) She starts wearing haute couture as an act of rebellion. To rehabilitate her reputation, she takes up what Charles dismissively calls “ghoulish causes.” Her various charities allow her to assert her compassionate humanity. When visiting an AIDS ward, she takes the hands of patients to help combat stigma.

Charles and Camilla can’t compete with her radiant stardom and even the queen is getting fed up. She warns her son, “She’s portraying herself as a woman cruelly betrayed by an unaffectionate husband — half the women in England can relate to that scenario.” The public relations war goes nuclear.

Diana is advised to take sartorial revenge. (This is when William Ivey Long’s tasteful costumes get to go wild.) The song “The Dress” instructs the princess on the path to victory. The number is laden with F-bombs. It isn’t the quantity of curses that’s objectionable. It’s the American swagger in which they’re delivered. Couldn’t someone at least throw in a “bollocks”?

“Diana,” built around superficial musical comedy triggers, is designed for Anglophiles who don’t want to get on a plane. The performers manage that modern Broadway paradox of being supremely competent and completely unconvincing. Ashley marshals his cast with reliable finesse, though his direction shamelessly panders. Babies have been conceived in less time than it takes a shirtless Gareth Keegan playing Diana’s paramour James Hewitt to strut his six-pack abdominal stuff. Kelly Devine’s choreography is a panting commotion.

When Diana’s shocking ending comes, it has no more emotional weight than an old CNN news clip. We already know the story. Sad, sad, sad — but wasn’t she glamorous! “Diana” turns a complicated life into light entertainment. In today’s degraded theatrical marketplace, the show should give fish and chips a run for its money.
Last Update:October, 06th 2020