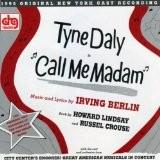 Another reinterpreted tale. Some Sally Adams, socialite, is assigned to the fictional Duchy of Lichtenburg (obviously, a certain vague blueprint of actually existing Liechtenstein or Luxembourg or a mixing of both of them), a small, simply tiny country, as the official ambassador of the United States. Although she has no real working skills as prerequisites for the job. After she goes there, she takes with her a certain young and very insistent journalist Kenneth Gibson, who just begs her to take him to the post of attaché.

Being in Lichtenburg, she meets the local secular world, rich and arrogant. She also met with the local Minister of Foreign Affairs, General Constantine, with whom she twisted romancing. Local princess must marry the prince of a neighboring state on political reason, but the princess is not enough wealthy in terms of dowry so that such a transaction could be regarded as beneficial to both of them, not just for her. Penetrating in the essence of the problem, Sally Adams meets Prime Minister of Lichtenburg, asking him to loan from US 100 million dollars for the future of the state, that requires to be independent via that marriage as a political deal, beneficial to their neighbors.

At this time, Princess Maria, whose marriage is on the nose, suddenly falls in love with Kenneth Gibson, against the will of all and against the natural flow of events in the royal life.

After Sally Adams returned to her home in the USA, along with Kenneth Gibson, after the expiry of her contract, on one of the social events she detects the presence of General Constantine, who came here for her. He brought with him a companion, Maria, who wants to marry Kenneth Gibson, abdicated, not because the need but love. Everything comes to happy ending.
Last Update:April, 06th 2016