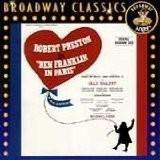 Quite "non-standard" musical, as some critics say. Because it depicts a lot of historical events, which are made out and only based on real events of 1776. When the father of democracy, Benjamin Franklin was trying to get the support from the second largest country of that time – France (to be able to win the political support of newly born country – the USA – so it was approved by them to receive the military and political aid), because the first country – England – was the one with whom he had fought. In the end, the King of France recognizes it and makes him the official ambassador, reinforcing his authority as the leader of the state and acting in defiance of Britain, showing his royal ambitions.

But this musical not so much shows the political part of the incident as "true", in terms of the creators, reasons why the King did so and not otherwise. Here it goes a made-up story – allegedly Benjamin Franklin had an intrigue in Paris in the face of Madame Diane de Vobrillac, which was a favorite of the king and had a huge impact on him. To her personal favor – say the creators of the musical – we are obliged to the emergence of such a powerful country as the USA. That is, the fate of an entire continent, world, and the most influential center of life solved then in 1776 not on the battlefield, although there is, of course, too, but in the beds of three people and two couples – Diane de Vobrillac and Benjamin Franklin & King of France and Diane de Vobrillac. From the point of view of modern medicine science if talking of exchange with fluids and bacteria, it is equivalent that Benjamin Franklin had slept with the King of France. To some extent, it is possible that this insidious subtext was trying to be reflected by the creators of the musical. Well, if so, they certainly have engendered some doubts in our minds.

As to the whole play, that all its components are quite enough to entertain the crowd during the couple of seasons, during which the musical shone on the stages of Broadway. 1964 was a year of much inspiration, spring moods and incredible stretch of imagination when various theatrical actions were created. This musical also weren’t capable avoiding some frivolity and even after the resurrection it did not last long, thanks to the clear reluctance of Americans to recognize the historical superiority of France. Or perhaps the story of the attainment of independence already stuffed on edge and we all just have to move on.
Last Update:April, 06th 2016