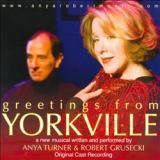 Anya Turner and Robert Grusecki performed throughout the whole United States’ territory: in nightclubs, cabarets, concert halls, even in small places, where were possible. Their songs were put on the radio, which included such programs as: Best Of Broadway & Woody's Children on WRCT Pittsburgh & WFUV New York, respectively.

New York Times published enthusiastic and fiery courageous reviews of their work, which included notes about the beautiful voice of Anya & the obvious talent of a male pianist-colleague.

Famous artists, such as D. McKechnie & S. Ross, were doing covers on their music works. Now the recording of their albums are purchasable within iTunes, Amazon, and CD Baby by means of mail order.

A. Turner & R. Grusecki were awarded with two honors; among them, one came from Meet The Composer, as well as were named twice as finalists of Richard Rodgers Award.
Release date: 2007
Last Update:March, 09th 2016