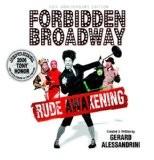 This project is somewhat departs from the classical understanding of the musical. It says more than 10 different stories, which are parodies on the famous Broadway and Off-Broadway productions. These include both the modern and the classic works of theater. The show is conceived, written and created by a single person – Gerard Alessandrini. Last gave to production 30 years of his life, which is pretty impressive. In the example of the above-mentioned, everyone can see what a sincere devotion to his favorite business is. In 2006, Alessandrini won the Honorable Tony Award for outstanding achievements in the field of theater. At 95%, it is a merit of the great work done in a series of great performances.

Forbidden Broadway show has been staged for more than 25 years. As for the part ‘Rude Awakening’, its first show took place on October 2007 in New York's 47th Street Theatre, the second name of which is Puerto Rican Traveling Theatre. Musical is still demonstrated to the audience, not fading in interest from year to year. In directing of production, two people are involved: G. Alessandrini and P. George. Producing and promotion of the project fell on the shoulders of G. Hoffman, J. Kravat & M. Shibaoka. In addition to them, performance includes: costume designer A. Colt, musical director D. Caldwell, lighting designer M. Janowitz, stage manager J. Griffith and others.

The cast of the musical is without star names: J. Bradshaw, J. Dickinson, J. Donegan & V. Fagan. Over time, cast suffered some changes. In particular, M. West replaced J. Donegan & M. Lewis came on the place of J. Dickinson. In addition, there were many rotations at the positions of the choreographer. In 2008, the project was nominated and then – won Drama Desk Award. A month after, it was recorded on CD, containing the best 21 songs. Album release was timed to the 25th anniversary of the histrionics.
Release date: 2008
Last Update:July, 12th 2016