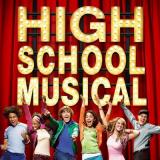 The first part of the magnificent musical trilogy opens an image of the main characters of the musical. By means of the songs, a viewer percepts Troy and Gabriella's feelings. It is that strange occurrence, when disadvantages become supremacies. All the excessive emotionality turns into benefit, when you get used to it.

The plot is simple and has no special value. It’s a love story about school life of "ordinary" students with their problems and troubles. Observing it is quite dullish, especially, when all the twists of the plot are terribly predictable. The movie has a lack of intrigue, unless there are small turns of the plot closer to the final. The moral is quite simple: it is necessary just to work and enjoy your life. Before meeting Gabriella, the most cherished dream of Troy was a victory in the basketball championship. However, since the moment they have met in karaoke on a New Year’s party, Troy can't reject a thought about casting for the main role in the school musical with Gabriella with the main female role! Gabriella overcomes sets of obstacles too. Her help is simply necessary for a scientific school team, but she wants to sing with Troy again.

Some words about actors: Vanessa Hudgens managed to show all feelings of her heroine, and Zack Efron has shown what a difficult choice Troy has faced. In general, all the actors and actresses were perfectly picked up. Their voices excellently sound in songs. Plenty of attributes to the musical in all the moments amuse the audience, for example, how the main characters sing as pop stars. And it isn't necessary to speak about the scene with basketball match. But if you get used to it, the movie becomes very pleasant. Or, if you are a teenager, there is nothing to use to, because this is your life.

A director of the motion picture is K. Ortega, who is one of the best directors in this genre. Once he presented the magnificent movie "Hocus-pocus". It is, of course, not his best movie, but it is quite amazing. Sustaining all the picture in the style of traditional musical is an unexpected decision. Energizing melodious songs and unusual dances throughout the entire musical don't allow coming off the screen. There is a wish to jump there and to dance together with the students.

Considering the budget of only USD 4.5 million, the creators have overcome all the expectations, which could be laid upon the movie of such genre. Excellent acting of the young actors creates the feeling of a global holiday, just like Disney always does.
Last Update:October, 06th 2020