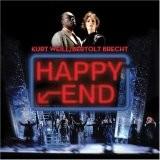 The show appeared long before the first Broadway’s production. In distant 1929 in Berlin, it has been created by two fairly well-known composers of that times – Weill & Brecht. After sharing their previous success in creating a musical “The Threepenny Opera”, they decided to try again. A couple stocked with patience, ideas, and came up with this musical, written by Elisabeth Hauptmann under the pseudonym of Dorothy Lane. But their company suffered from a lack of time and problems. Hauptmann did not have time to finish the libretto before the start of the play and the cast saw it for the first time only on the 1st day of the preliminary readings.

After opening in 1929, the show had only 7 hits, and then was forgotten for almost thirty years. After it was re-breathed with life in 1956 in Munich, in 1957 in Hamburg and in 1965 it reached the West End. And finally, in 1977, it came to Broadway. The musical premiered on Broadway in May 1977. 73 performances were staged before closure in July of the same year, which is far below-the-line moderate indicator.

Famous Christopher Lloyd played the leading role, coped with it so fantastically well, that even has been remarked by critics, who did not like this performance generally. The musical was nominated for three Tony Awards and two Drama Desks, losing all of them. The musical is not particularly notable for its music, but it has several musical tracks, named as one of the best songs of Brecht-Weil duo. Critics also noticed them. "Surabaya Jonny", is, could be easily argued, the greatest song ever written for the theater" – a quotation from New York Magazine sounds like this.
Release date: 1977
Last Update:March, 10th 2016