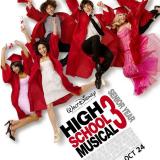 High School Musical 3: Senior Year begins with the last basketball game of the school team. At first, they lose, but Troy, as usual, revives self-confidence in students. They win the game. After a victory, Troy organizes a party, at which he makes plans for the future with Gabriella. They don't want to break up after school. And in general, they never want to leave each other. An exchange student appears at school. It is Tyra, who is from Britain. Sharpay meets this girl and employs her as an assistant.

The teacher, who is responsible for musicals, notices few people submitted the application for participation in the upcoming shows. It disturbs her. Sharpay wants to offer her option of performance with only her own participation. Kelsey learns about it. She gathers the students together and suggests to make the show about their senior class. It also becomes known that Troy, Kelsey and Sharpay apply for grant at a prestigious school. However, just one student can receive it. Having learned about this, Sharpay tries to get the best role in the musical. She asks Rayan to convince Kelsey to give her the song.

Troy and Gabriella rehearse on the roof. The girl shows how to dance a school waltz. Gabriella gets a chance to enter Stanford. When Sharpay learns about it, she persuades Troy that only he holds her from it. The couple talks about it, and Gabriella goes to her college. Troy's father talks with him about entering a local university. Such conversation upsets the guy very much. Meanwhile, his teacher sends the recommendation of him to Juilliard.

Soon he receives a message from Gabriella. She says she loves him, but can't return. She also won't be able to be present at the final. Troy comes to Gabriella's university. He persuades her to come back. They kiss. Jimmy asks Troy to replace him on the performance, because he will be late. At this performance, there will be Juilliard's representatives. The show begins. Jimmy sings with Sharpay instead of Troy. She is confused. Troy and Gabriella sing in the second part of the musical together.

During Tiara’s performance, Sharpay steps on the stage and begins to sing the song. At the end of the performance, Kelsey and Ryan learn that they can enter Julliard. Troy chooses Berkeley to be closer to Gabriella. In the end of the film, the students sing their last song.
Last Update:February, 25th 2019