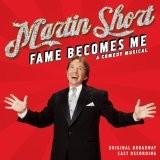 Jokes and irony permeated the entire musical, which is a "one-man show", despite the fact that he was there with help of five other actors, including starring such first-class fames as Whoopi Goldberg, Chita Rivera and Billy Crystal, among others. What is different generally about this play comparing to many others who like to arrange a personal benefit? However, it is not just self-promotion, as funny action almost does not stop and there is also an irony, self-satire, parody, jokes, and the acuteness on the participants in the show business in a whole. In general, a beholder must be "in the know", having a pretty good indication of what is happening in the theater business and show business in its cinematic manifestation because there are parodies on such things as Jesus Christ Superstar. In a nutshell: if you have not seen it or never heard a record from it, you would hardly realize after all that it contained a parody. On the other hand, many visuals lie on the surface. In particular, when Martin Short states: "I am going to tell a lot of stories from my life, most of which are based on a complete fiction. So let's start with the truth. I was born in 1976." (Note – Martin Short was born in 1950 and his active work in showbiz started in 1972).

So for what is worth to pay from 70 to 215 dollars for one ticket to his show? Firstly, for those who doubt – Martin Short really is keen in what is called “sharp-tongue” and it is not for nothing that treads the stage. Apart from his active work, he is very well comedic actor. Remember vivid scene from the beginning of the film «Death Becomes Her» (1992, Meryl Streep, Bruce Willis, Goldie Hawn and Isabella Rosellini), when the audience got up and went away from the musical show of Meryl Streep, who ineptly produced it, for the sake of clumsy self-promotion? Roughly the same thing, but exactly the opposite, can be seen here – spectators come not away but in to absorb the talent (and a giant charm of Martin Short), which oozes from the stage. By the way, it seems to us, Martin plays on a big contrast between this film, which also has a lot of humor, but black one and makes it really the other way around, polar, to receive light, bright and sparkling musical, on which you rest.
Last Update:April, 06th 2016