Do Re Mi synopsis 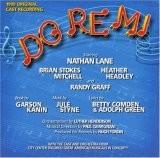 Do Re Mi synopsis

Do Re Mi Synopsis - Broadway musical

The musical tells the story of how some sad sack lived, who did not want to find a normal job. He had a wife, whom he seems to loved, but not listened to her pleases and requests to find some decent job, which would give stable earnings. Not that he did not like to work, but have been always engaged in some garbage affairs. He tried himself as a seller of juke boxes (somehow, completely penniless, he and his accomplices with comical names Fatso, Brains & Skin, were able to buy as much as 300 ones & tried to resell them to some music producer. Just what the hell did he needed them for, these music boxes, if he was producing real artists, not some cranky machines?). Then he was trying to become a producer of some naive canary who sincerely believed that this person may bring her to the people – despite that he was not able to bring himself there. And he did that in spite of the fact having a wife, tolerant and moderately careful as much as it is possible to take care of this scoundrel, unable to be called a man, not having normal income to provide him and his family. As in that joke, when a woman says to her son at the zoo that a man is the one who has money, otherwise it is considered to be a mate (like those male gorillas in the cells).

His wife, a cute emotional woman Kay, reflects of how unhappy she is in marriage. The reasons why she remains with him and suffer all his failures and lack of permanent income – are unclear. Maybe she loves him? Too unobvious. In the end, he realizes that the only thing he has got is a nice marriage. We can say that this is a musical about loser – an ordinary man among millions of similar.
Last Update:April, 06th 2016